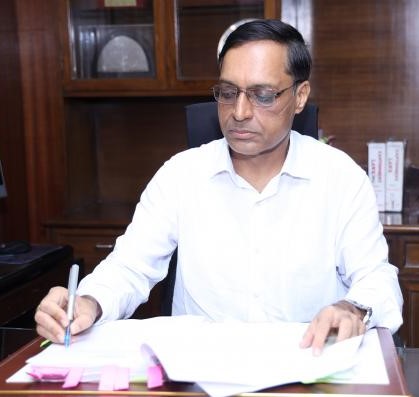 National Institute of Defence Estates Management (NIDEM), training institute of Indian Defence Estates Service (IDES) has come a long way since its humble beginning at Meerut in 1982. It was shifted to Delhi in 1995. It was initially located in the office of Defence Estates Officer, Delhi Circle, thereafter in the premises of Raksha Sampada Bhawan. In both these places, the training infrastructure was inadequate. With the sanction of MoD vide letter No.41/103/DE/NIDEM/Projects/2013/189/F/D(Q&C)/2014 dated 28th July, 2014 a new building was constructed at a cost of Rs. 28.4 crores to meet the deficiency of infrastructure.

Dr. Subhash Ramrao Bhamre, Hon’ble Raksha Rajya Mantri inaugurated the new building of NIDEM on 22nd March, 2018. After getting its new building, it has fulfilled the dream of having a full-fledged set-up for imparting training to the new recruits as well as updating the in-service officers in modern technologies in management of valuable defence land and administration of Cantonments.

The Institute basically trains the officers of Defence Estates Organization in municipal administration and land management issues. With the rapid changes in the field of urbanisation and e-governance, NIDEM has developed expertise in training officers in the fields of solid waste management, RTI, Public Private Partnership, developmental planning, public health, the gender issues etc. Besides training the officers and staff of Defence Estates Organization, NIDEM also trains the officers of the three Armed Force and other organisation under Ministry of Defence on land related issues and Cantonment matters.

Proper training gives the officers and staff, all the required skills to discharge their duties efficiently and ethically.

On the behalf of the Department, I wish great success in the future endeavours of NIDEM with launching their own website.

While all efforts have been made to make the contents of this website as authentic as possible, the National Institute of Defence Estates Management  will not be responsible for any loss to any person caused by any shortcoming, defect or inaccuracy in the information available on Website. Any discrepancy found may be brought to the notice of the NIDEM.